SAN DIEGO – Yu Darvish and the Chicago Cubs are heading back to Wrigley Field feeling better about their situation than they had in several days.

Darvish struck out a season-high 14 and allowed only two hits in six innings, and the Cubs beat the San Diego Padres 4-1 Thursday to remain tied with Milwaukee for the NL’s second wild-card spot.

“Everyone has confidence for sure,” Darvish said. “I know the last 10 days was tough, but we still have to compete each day.”

If not for two walks in the fifth inning, Darvish might have gone deeper.

“He wants to be out there,” manager Joe Maddon said. “Those couple walks, I mean, he could have got seven. That one inning when he walked (Ty) France and (Luis) Urias, that put him at 88 after five. I’m always counting pitches and I’m looking, this is a possible seven innings, at least, and then the walks just did not permit that to happen. But he’s uncanny coming out of his breaking ball. It’s ridiculously good, especially against left-handers.

“There’s nothing to say negative about his performance. It was great.”

The Padres scored in the ninth when Manny Machado was hit by a pitch with the bases loaded and two outs, but Rowan Wick struck out Luis Urias to end it.

Chicago split the four-game series and won for just the second time in seven games. The Brewers beat the Miami Marlins 3-2.

Darvish (6-6) retired his first eight batters before allowing his first hit, an infield single by starter Dinelson Lamet. Darvish kicked the ball with his right foot and it caromed to third baseman Kris Bryant. Darvish struck out Greg Garcia to end the inning.

The big right-hander had at least one strikeout in every inning. After Greg Garcia tripled leading off the sixth, Darvish finished strong by striking out the side, including Eric Hosmer for the third straight time.

Darvish was one shy of his career high, set Aug. 12, 2013, at Houston while he was with the Texas Rangers. He led the big leagues that year with 277 strikeouts.

Darvish said he blocked out the Cubs’ losses to the Padres the previous two nights.

“You know me, I don’t care,” he said. “I always focus to do my job and throw strikes and throw the right pitch in the right situation. That’s it.”

As well as he pitched, “Today’s not good enough,” he said. “Knuckle-curveball for sure, splitter is not there, hard cutter was good. Slow curve was good. That’s pretty much it.”

Said San Diego’s Wil Myers: “That was one of the better versions I’ve seen out of him. He was mixing really well, locating well. When you’re getting some pitches off the plate and have the ability to get back in counts sometimes, that’s really what it is.”

Myers was ejected by plate umpire Ramon De Jesus in the ninth after he questioned a strike call.

“You guys saw the game. There were a lot of calls that could have been different,” Myers said. “I think that 3-1 pitch in the sixth inning was tough. I worked a walk there. Darvish obviously threw the ball really well. I think that last pitch just kind of set me off. It is what it is. I know umpires don’t get them right all the time, but I feel like sometimes we’ve got to lock it in a little bit better.”

“He had a good mix, good stuff today,” San Diego manager Andy Green said. “He’s got punchout stuff. He always has. When he’s on, he’s really tough. He threw a really good game. There were some pitches at the margins that you know how we felt about them today.

In Baltimore, Rich Hill struggled with his control during his first start since June 19, and Los Angeles broke a sixth-inning tie by scoring two runs on a passed ball in the victory over Baltimore.

Dodgers right-hander Kenta Maeda, the team’s fifth pitcher, worked one scoreless inning, allowing a walk. He picked up his second hold of the season.

In New York, Juan Lagares hit a grand slam and a two-run shot and the Mets set a team record with six home runs in a home game, routing Arizona for a four-game sweep.

In Detroit, All-Star catcher Gary Sanchez became New York’s latest injury concern when he left the second game of a doubleheader with left groin tightness as the Yankees defeated the Tigers to complete a sweep.

Sanchez exited in the fourth, an inning after he was thrown out in his first stolen base try this year. He has been on the injured list three times in the past two seasons because of groin strain.

CC Sabathia pitched into the fourth inning of the second game in his return from the injured list. Sabathia, who has dealt with right knee problems, allowed only one hit through the first three innings but gave up a two-run double to Brandon Dixon in the fourth. He threw 56 pitches in 3⅓ innings before being relieved by Domingo German (18-4). Aaron Judge and Gio Urshela each hit two-run homers for New York in the second game. Spencer Turnbull (3-15) allowed four runs and seven hits in five innings.

Galvis’ second slam of the season and third of his career capped a five-run rally in the seventh inning for a 7-5 lead.

Lewis hit a solo shot off the scoreboard in left field in the fifth, becoming just the second player in major league history to homer in each of his first three games. Lewis joined Trevor Story as the only players to accomplish the feat. Story connected in his first four games — totaling six homers in that span — for Colorado in 2016. 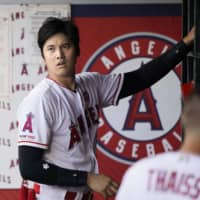 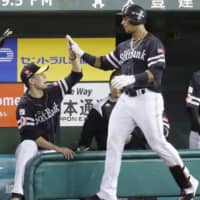 Hawks edge Lions, move back into first place
Yurisbel Gracial delivered a solo home run, while Kodai Senga threw eight innings of one-run ball, as the Fukuoka SoftBank Hawks held on for a 3-2 win over the Seibu Lions on Thursday.
Th… 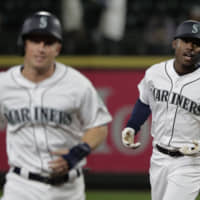