Eagles rally from eight runs down to beat Fighters 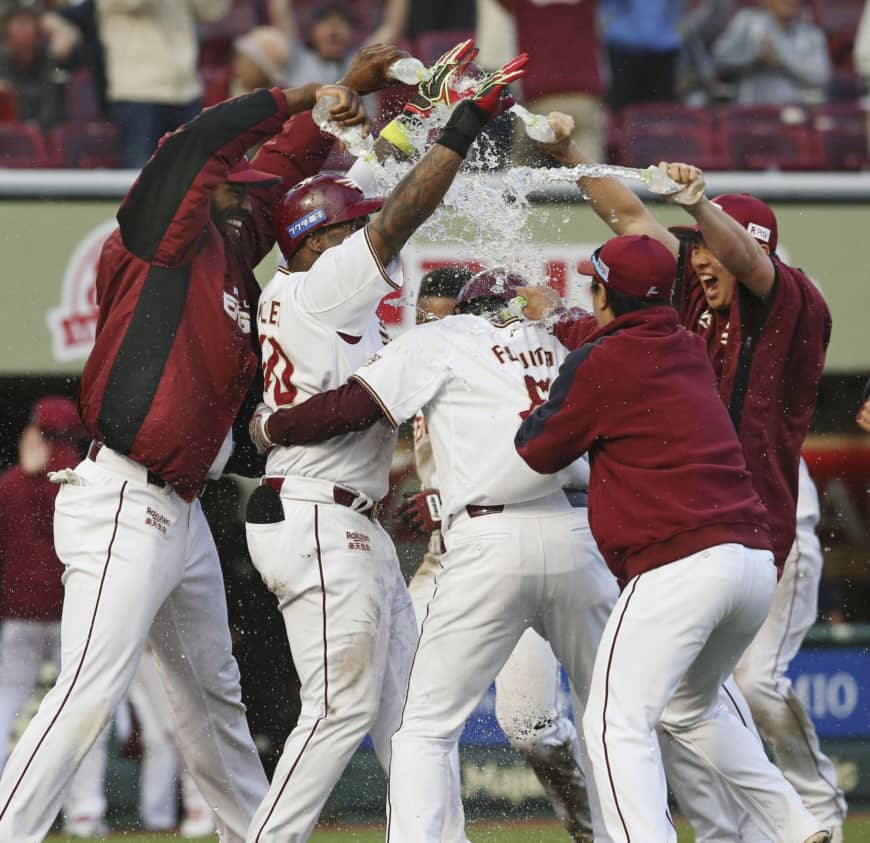 SENDAI – Kazuya Fujita scored the winning run in the 11th inning Wednesday as the Tohoku Rakuten Golden Eagles rallied from eight runs down to beat the Hokkaido Nippon Ham Fighters 9-8 in a dramatic sayonara victory.

Hideto Asamura tied the game with a ninth-inning, solo home run against right-hander Ryo Akiyoshi, and Fujita scored on a Zelous Wheeler sacrifice fly to turn the game around at Rakuten Seimei Park Miyagi.

Fujita led off the 11th with a single off Fighters reliever Taisho Tamai (0-1), reached third base on a Hiroaki Shimauchi single and sprinted home on the sac fly.

“I was determined to reach base when I stepped to the plate, so I was glad I was able to get a hit,” Fujita said. “To be honest, I really wanted a pinch runner to replace me, but manager (Yosuke) Hiraishi said he wouldn’t. So I wanted to come home no matter what.

“All of the players are very persistent and determined not to give up (even when trailing), so I think that’s why we have been able to win these games,” he said.

With the Eagles trailing 8-0 in the bottom of the fourth, Jabari Blash blasted a grand slam against Fighters starter Chihiro Kaneko. The slugger went deep again in the eighth inning, belting a two-run homer to cut the deficit to two runs.

Motohiro Shima capped the Eagles’ three-run eighth inning by hitting his third homer of the season, a solo shot against righty Naoya Ishikawa.

Sung Chia-hao (1-1) picked up his first win of the season after pitching a scoreless 11th inning. He allowed a hit and a walk to the five batters he faced.

Taishi Ota powered the Fighters early, hitting homers in consecutive at-bats, in the first and third innings, and driving in four runs.

But with Rakuten gaining momentum, the visitors were unable to hold the lead.

At Fukuoka’s Yafuoku Dome, Shuta Tonosaki hit a two-run homer in the top of the ninth as Seibu came back to beat the league-leading Hawks on the road.

At Hiroshima’s Mazda Stadium, Seiya Suzuki connected on a two-run homer in the bottom of the 10th to lift the Carp to a win over Yakult.

Hiroshima staged a four-run rally to even the score in the ninth before winning it in extra innings.

At Tokyo Dome, Hanshin had 18 hits, including 11 against starter Tomoyuki Sugano (5-3), in a win over Yomiuri.

At Yokohama Stadium, the BayStars drove in five runs in the bottom of the sixth, including a grand slam from Hikaru Ito, on the way to a win over Chunichi